The Salty Dog Rag I do is most like Version 1, but after more than 20 years of dancing it, I take a lot of liberties with the variations. There's so much you can do with a schottische and it doesn't take long to learn the basic pattern. Surprising how many songs will fit the bill.

Here's the discussion from 1995. Poor us...no digital cameras, much less YOU TUBE. How did we survive? Now we can see how they do it in Dartmouth, in Japan, and Finland.

When teaching Salty Dog Rag, I always break it down to its most basic step -- a schottische. The whole dance (ignoring what the hands and arms are doing, and direction of dance) is just a schottische, as in
1, 2, 3, hop; 1, 2, 3, hop; step-hop, step-hop, step-hop, step-hop.
OR
R, L, R, hop; L, R, L, hop; R-hop, L-hop, R-hop, L-hop.
and it repeats itself the whole dance. So this is what I teach first without worrying about the pattern of the dance. Once the dancers understand the basic schottische, and that they can do the steps in a myriad of directions, then it's time to teach the pattern of SDR.
Part I, grapevines and travel
In promenade postion,
grapevine R (R, L behind, R, hop)
grapevine L (L, R behind, L, hop)
travel forward (4 step-hops)
Repeat Part I
Part II, cross, solo turn, R-hand turn
cross (R, L, R, hop):
keeping LEFT hand joined (drop R hand)
Man move to his RIGHT, while pulling the lady across (in front of him such that she ends up facing reverse line of direction inside of the circle, Man is outside of the circle facing LOD. (*** see my soapbox note on this below ***)
solo turn (L, R, L, hop):
partners pull toward each other with that joined left hand, drop hands, and cross back to own side making a full turn over the left shoulder, woman crossing in front of the man, and on last beat clap and catch right hands on the other side. (I teach this without the turn first, by having them crossover back to their own side and change hands. That way they see where they're supposed to end up.) Man will end on inside of circle facing LOD, woman on the outside of circle facing RLOD
R-hand turn (4 step-hops):
right hand turn once around (note that man should be on inside of circle facing LOD, and woman on outside of circle facing RLOD)
Repeat Part II, but on cross BOTH the man and the woman are moving to their own Right, changing hands from right hands joined to left hands joined and changing sides, woman always facing reverse LOD. At end of R-hand turn, woman turns in to man to go back to promenade position and begin dance over.

SOAPBOX NOTES:
This dance of course has been a part of the folk process, being modified and added to over the years for various reasons. I believe it was first published in the late 40's/early 50's in *Sets In Order* square dance magazine. I can look for the issue if anyone is interested. If anyone knows of an earlier publication of this dance, I would like to hear about it. I have seen many, many variations all over the country.

MORE SOAPBOX NOTES:
With regard to the crossing over in Part II, you will note that I have the man and woman begin with a cross over. I believe this to be the original choreography and is what I prefer. However, instead, most people leave left hands joined and back away from each other, the result leaves the woman on the outside facing LOD, man on inside facing reverse LOD. The problem with this is that it leaves the woman on the inside at the end of the sequence, forcing an extra half-turn that there really isn't time for to get the woman on the outside and into promenade position.

3rd part -- one two three kick one two three clap
(this is difficult to describe)
holding right hands walk by your partner with a right, left, right, kick (left foot). Since you've been holding hands and have passed by each other, your right arms are stretched somewhat behind you and so you can do the second section which is....pulling on your arms and letting go to get a snapping effect turn singly clockwise one turn and clap. This turn will take you back to the position you were in when you started this part (the 3rd part). As the first section was in 4 counts so this section is also. 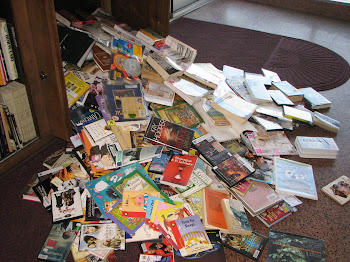